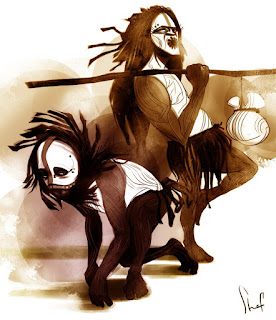 Amazing. Two posts in one week! Setting standards that I'm pretty sure I can't maintain. Anyway since I enjoyed the process and subject matter so much, I felt compelled to do more sketches for the Eredo project. These are two common wood spirits that inhabit the forest of Eredo, referred to by Yoruba people as Oro/Iwin. Also I forgot to mention in the last blog post that I attended a lecture by animation legend Bill Plympton earlier this month at MCA, and got to meet him briefly thanks to my old animation professor. He seemed like an affable person and it was just fantastic learning about his techniques and philosophy.
Posted by Shof Coker at 8:40 AM 2 comments: 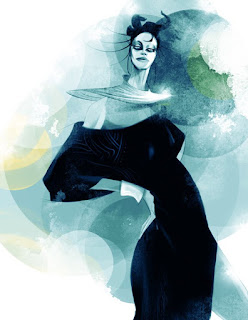 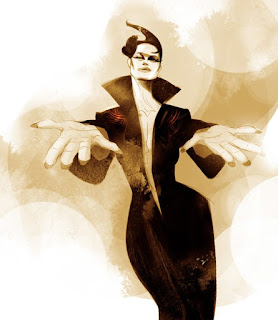 I've been doing a lot of illustration lately and I decided to channel some of that energy toward a personal project. These are two quick sketches of the main antagonist for a project I've been developing in my spare time. Her name is Queen Sungbo and about a thousand years ago she once ruled over a really large portion of Southern Nigeria, specifically the area North East of present day Lagos. She was a childless widow and commissioned the building of Africa's largest earthwork, a 100 mile long (circumference) system of 20 meter high ramparts and ditches surrounding present day Ijebu Ode. I'm still working out the story of Eredo so I won't even try and explain any of it now, however Eniola as seen previously on the blog is the story's heroine.
Posted by Shof Coker at 7:57 AM No comments: 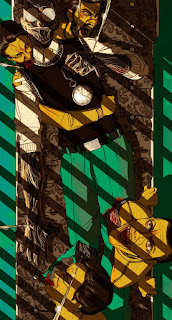 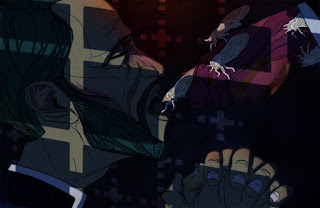 Over the last week, I worked on these illustrations for the wonderful people at Chatterbox Audio Theater in Memphis. They air live radio performances every month on WKNO, which can also be listened to on their site. In October they had a special Halloween program that they performed on the 31st from 7pm- 9pm which can be listened to here. I created two illustrations based on two stories from the program called Hypnosis, and Silent Retreat written by Robert Arnold, who is also the co-founder and executive director of Chatterbox Audio Theatre. They were really fun to work on as I got to experiment with some techniques and don't deal with material such as this very often Let me know what all ye in blogland think.
Posted by Shof Coker at 6:20 PM 2 comments: