Just wanted to post a selection of fun things related to Outcasts of Juiter of the last few months. The test t-shirt came last week and it looks excellent! We'll be putting in the full order soon. The 1st test proof of the comic came by a couple of weeks ago and there is a process image of the Denarii minis coming together too. 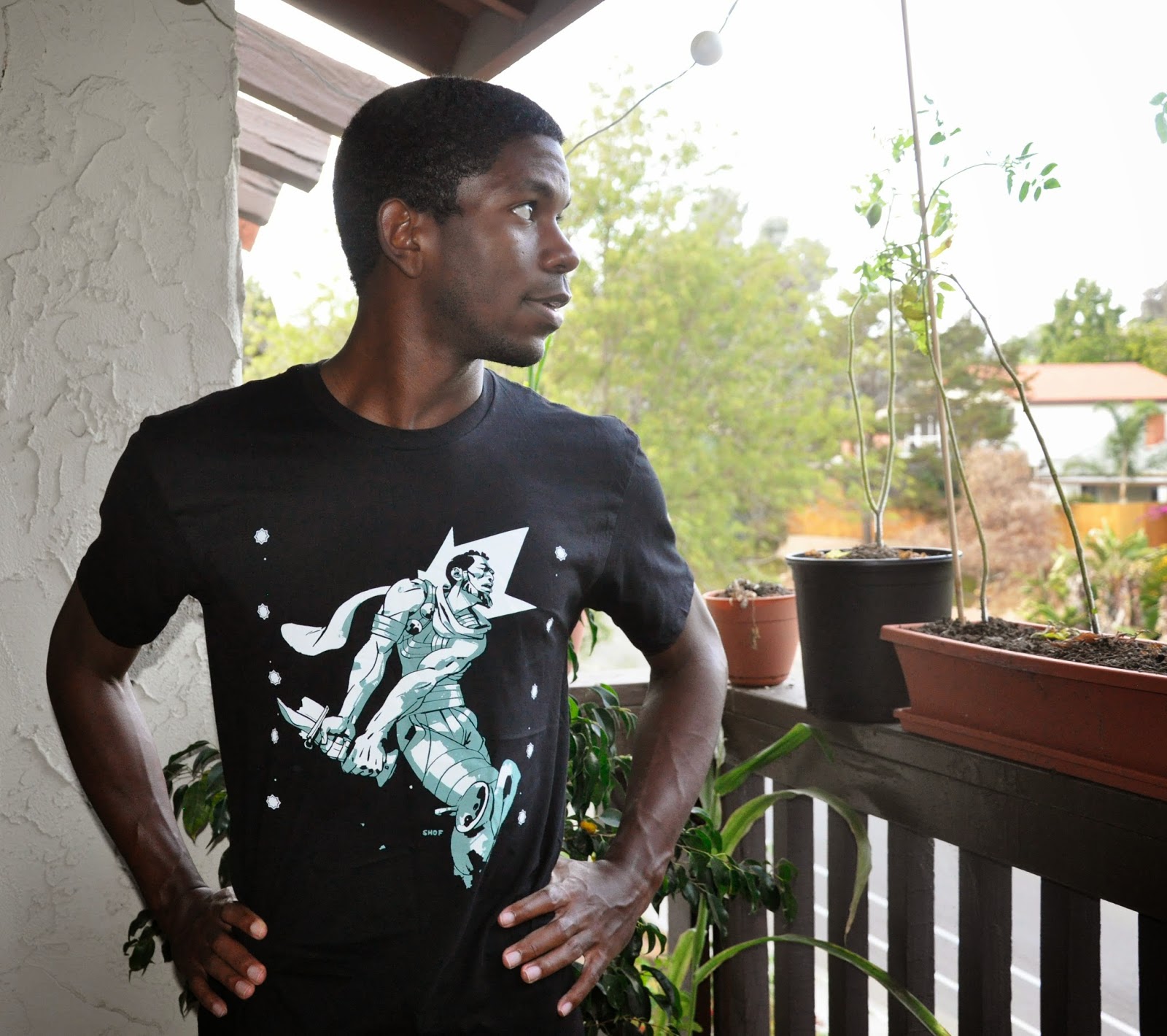 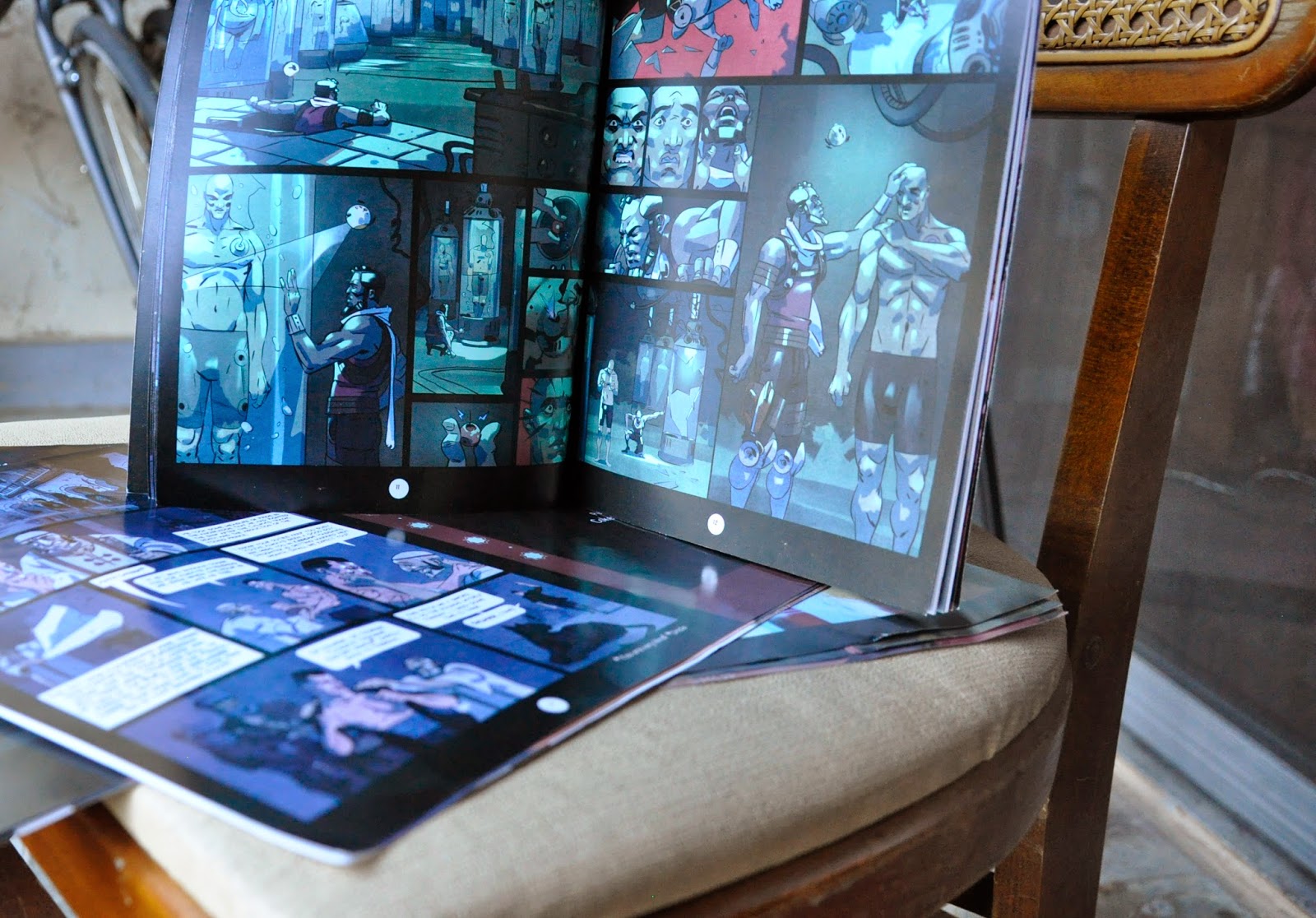 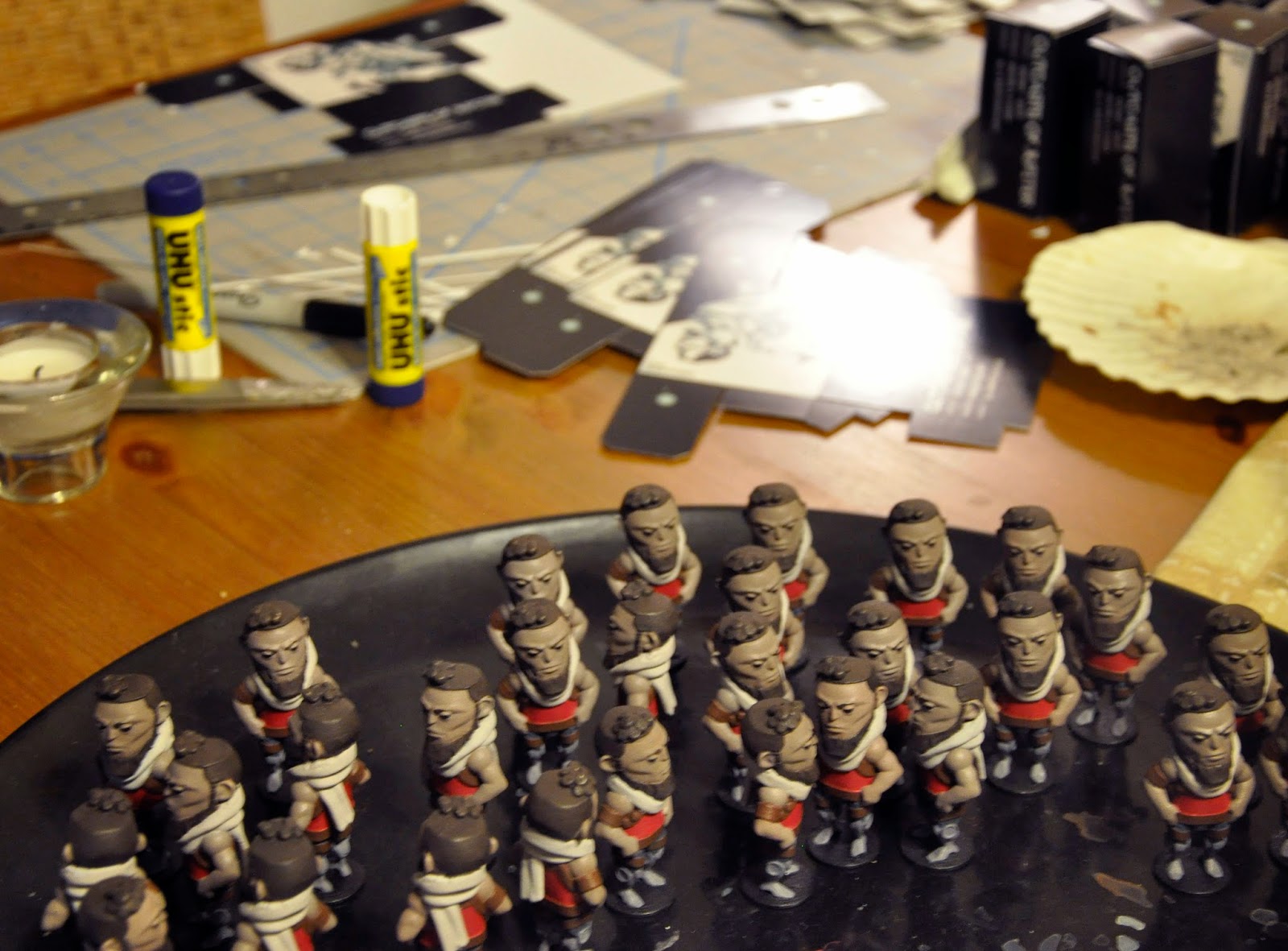 One last thing, my work got featured as an editor's pick on Artstation here and on the Nigerian contemporary style site, AIM Business here. Good times I say.
Posted by Shof Coker at 9:33 PM No comments:

Phew! Sometime last week I finished work on Outcasts of Jupiter. I loved every bit of working on Outcasts and I'm so glad my brother and I got the chance to realize our dream.The digital comics will be sent out to our dear Kickstarter backers quite soon. We've sent it to a select few for proof reading and general editing, but I must say I'm a very relieved man at the moment. The next few months will be the journey to see it printed and that's another level of excitement. I'll post a few process pages here and there in the interim. Of course, till then you can see even more news related to the project here.

Posted by Shof Coker at 9:52 PM No comments: The Outcasts of Jupiter Kickstarter has been both draining and highly exhilarating to run, but lo! I have managed to complete another page for you wary traveller. Sit a while and enjoy another slice of this tale we're trying to release upon the world.

Shobo and I also got interviewed by Chris Sains over at Capeless Crusader. Check it out!
Posted by Shof Coker at 11:43 PM No comments: 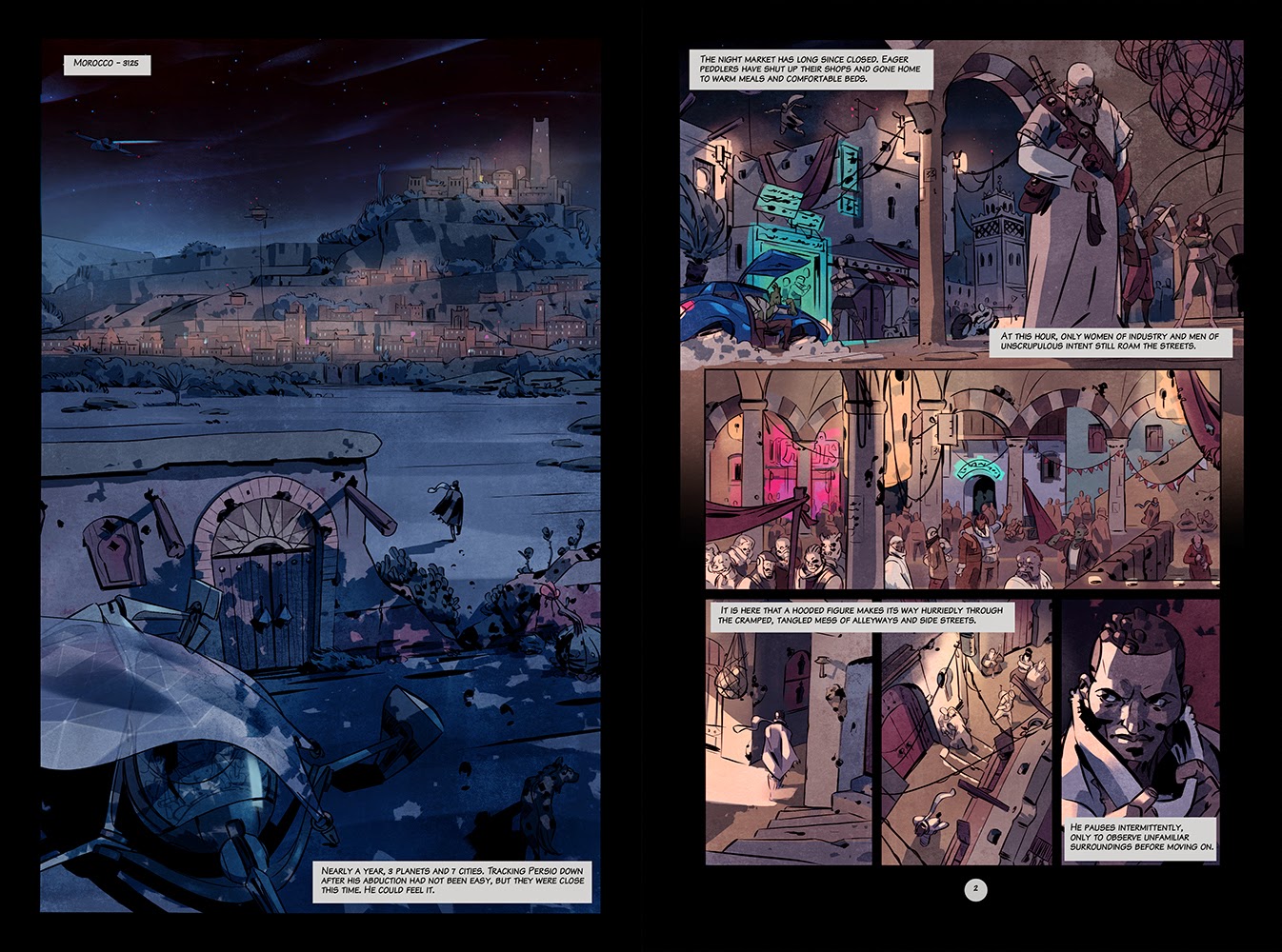 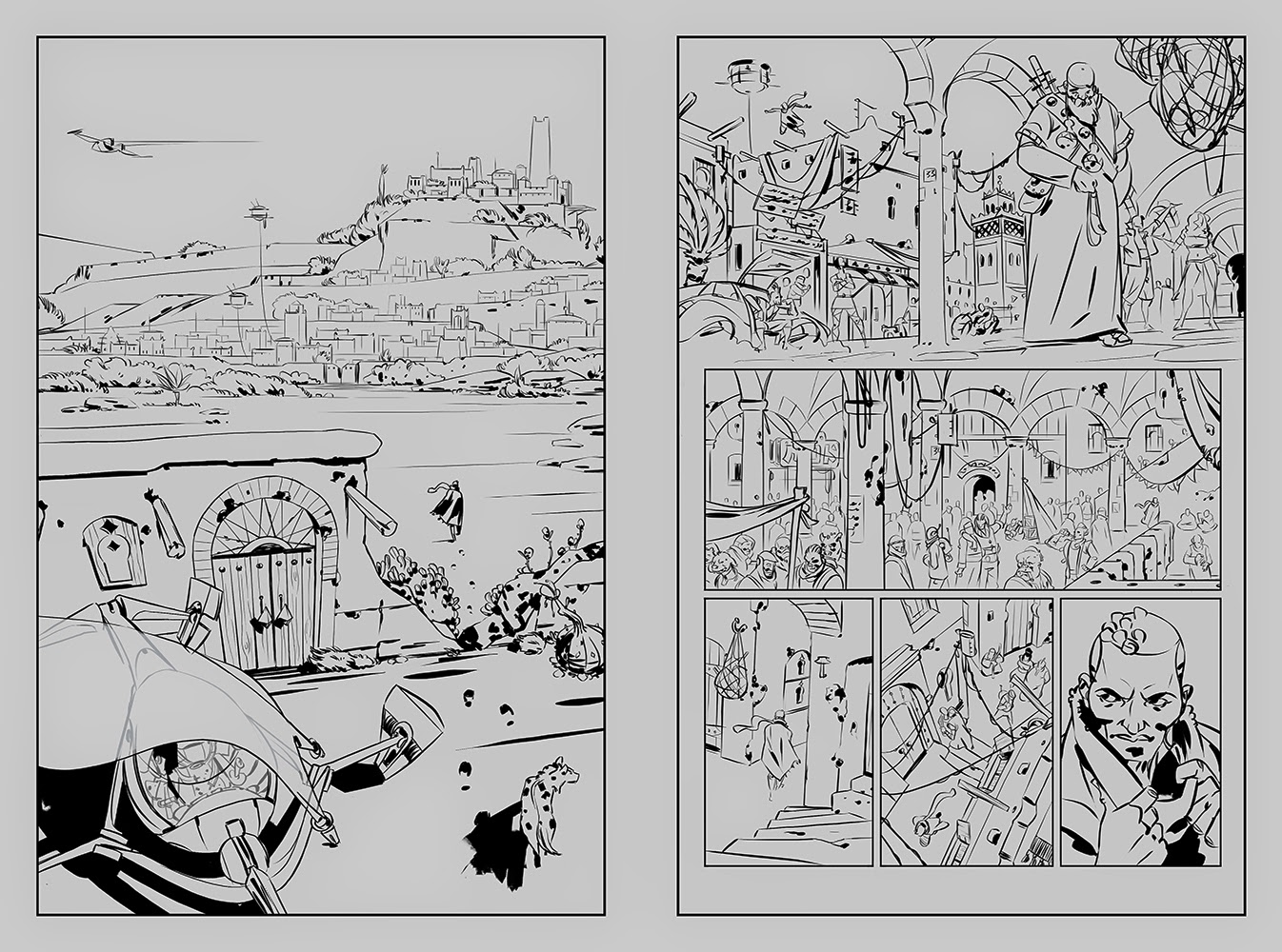 Here is a small preview of the first two pages of Outcasts of Jupiter. The Kickstarter has been up for a week now and we're making steady progress. It's not a trivial whim when a long held dream is fulfilled. There are some wonderful people out there making it happen.
Posted by Shof Coker at 10:24 AM No comments: 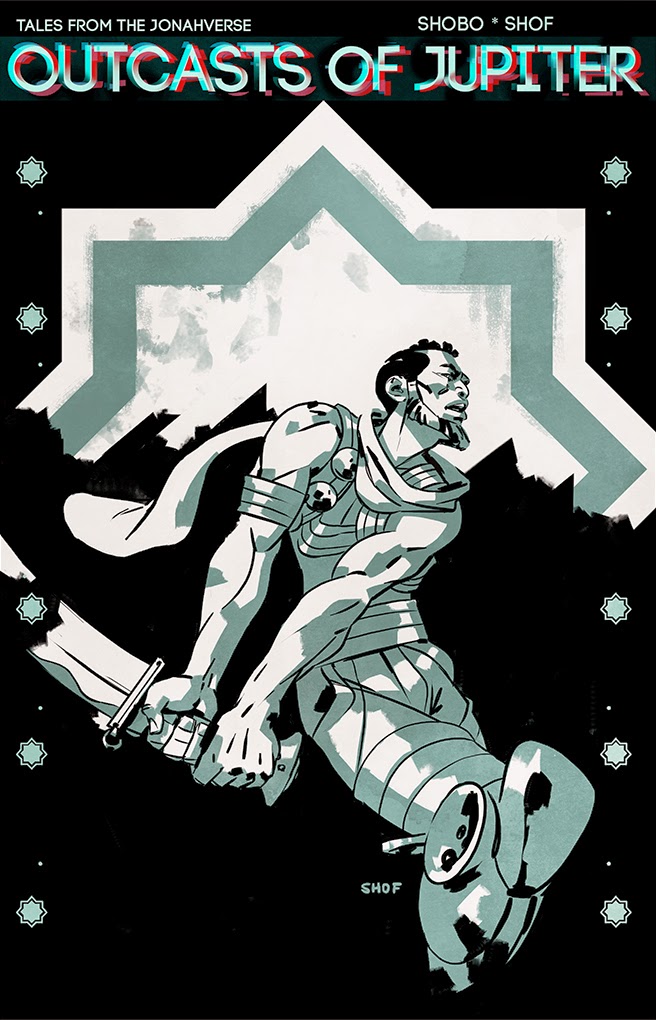 Hey everybody! We launched our Kickstarter today for our very exciting science fiction comic, Outcasts of Jupiter. Shobo, Funlola and I couldn't be more excited!

Outcasts of Jupiter is a new, scifi adventure comic written by Shobo Coker and drawn by Shofela Coker. Our story takes place on Earth, in 3125, in the fictional City of Seven Faces, a visually and culturally rich cliff side city in our version of Morocco. The exotic City of Seven Faces is a mysterious place, full of strange secrets, slavers, gangsters and wanted criminals.

You can visit the Kickstarter here!
Posted by Shof Coker at 8:09 AM 1 comment: 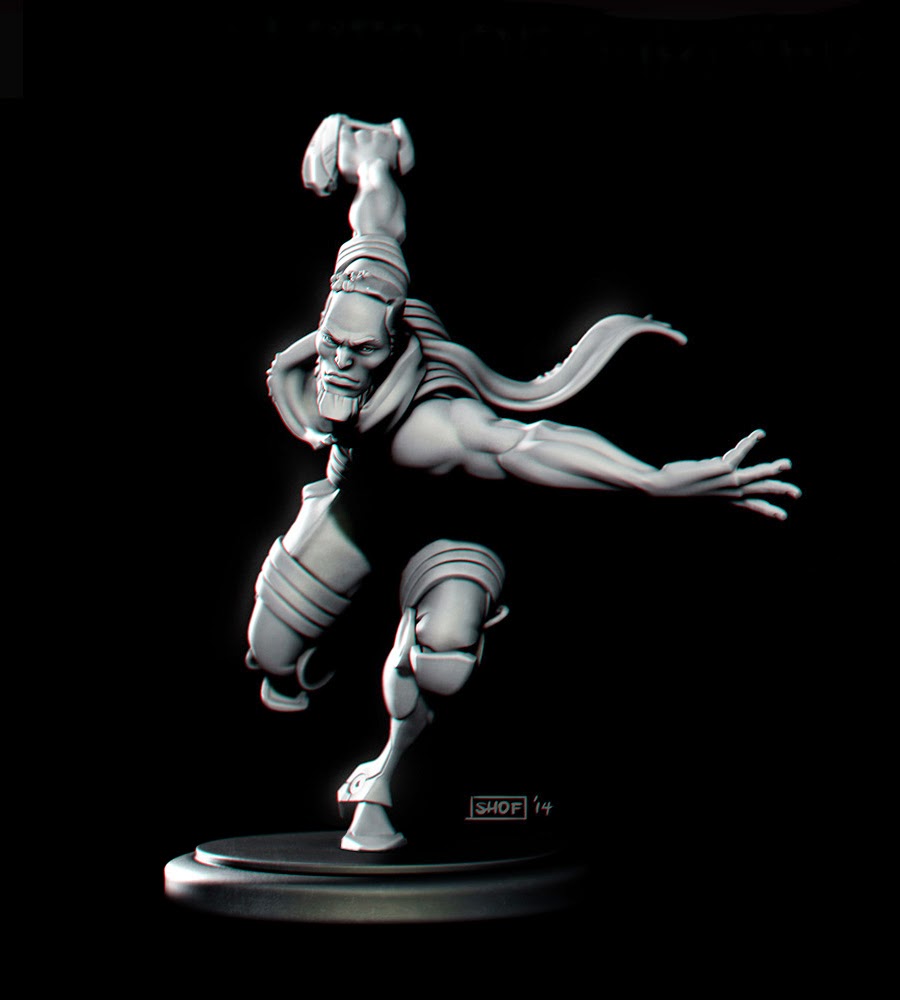 This is the the sculpt of Denarii I mentioned earlier. The final step will be a 7 inch, 3d printed figure produced as a reward for one of the tiers of our Kickstarter campaign for the Outcasts of Jupiter comic. Here are some of Shobo's words to describe the character:

'Powerful and ruthlessly efficient, all wired energy and tension, Denarii is gifted with absolute fearlessness and the unique ability to infiltrate just about any structure with extreme efficiency.
Shof designed him as a man of Afar ancestry. Denarii is a descendant of the once great Kush empire in Northern Africa, where the Blue and White Nile's meet.  He is quiet, noble, and kind, with a strict personal code of honor and a character stained by a black temper and a weakness for drink.
A man of few words, he prefers action to chatter and harbors a strong dislike of the facade of modern civilization.
If Sulesh is the brains of the group, Denarii is its conscience, its beating heart, its compassion and its instrument of swift, terrible justice.' 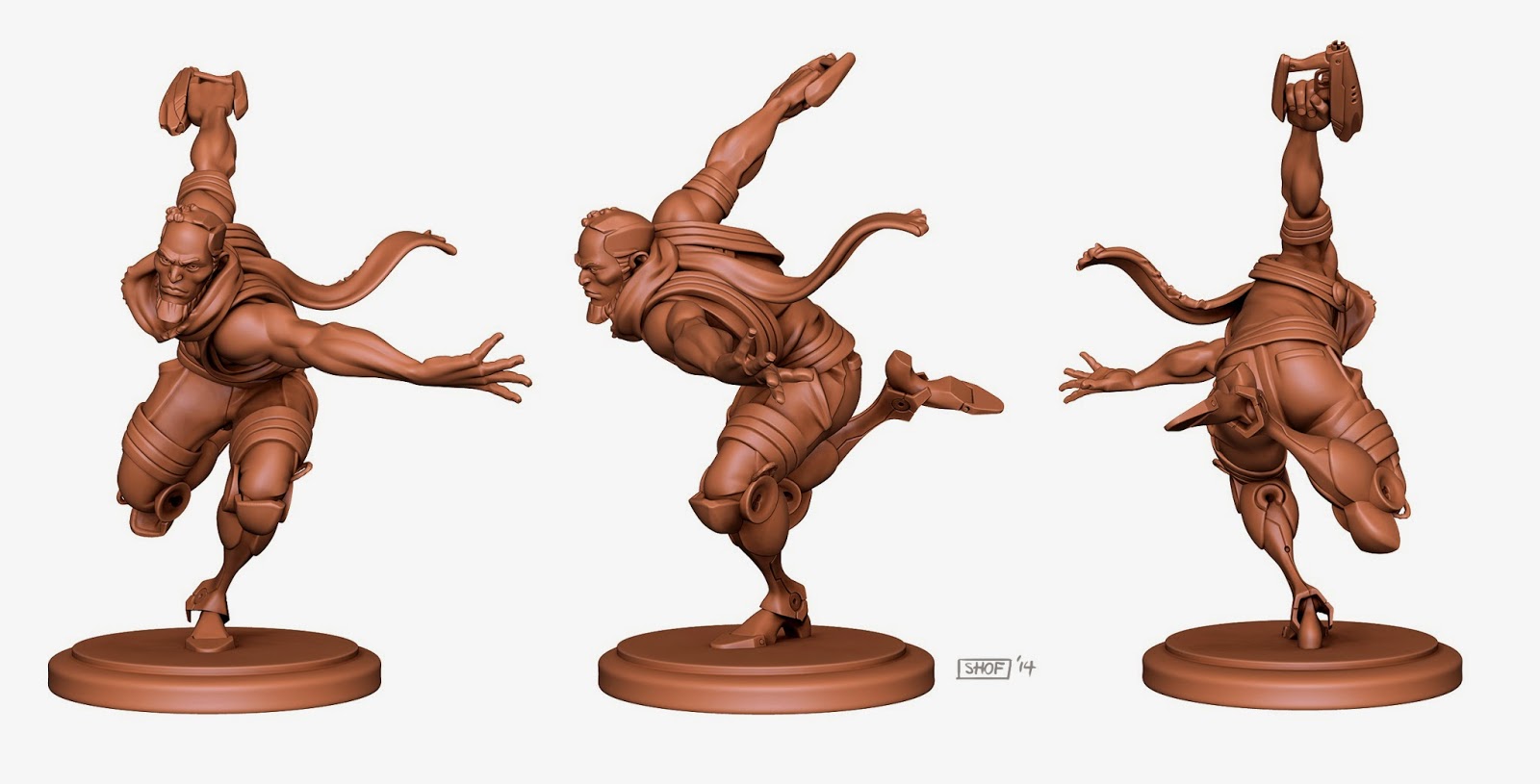 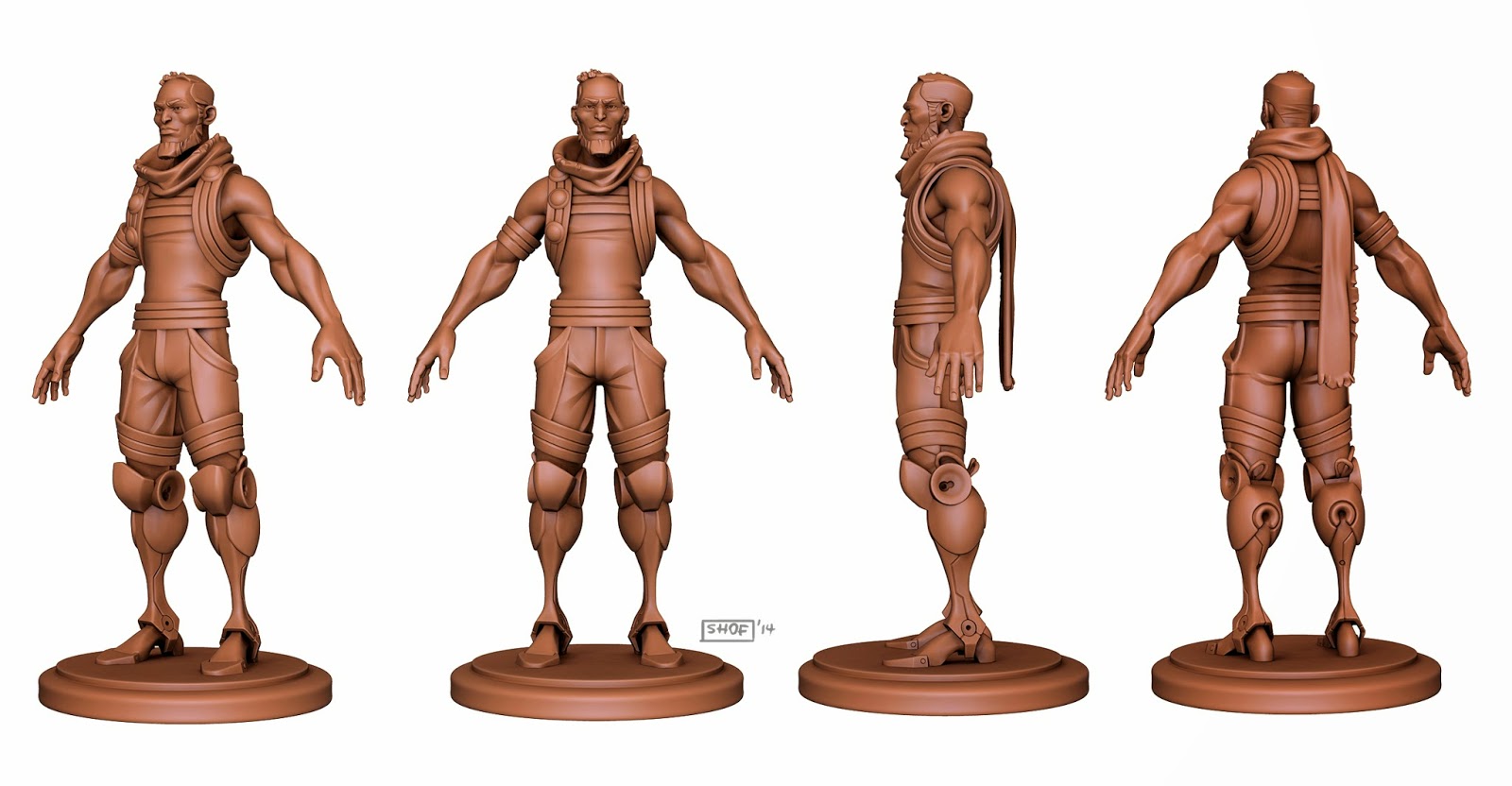 Here are some sketches I based the model on as well as turnarounds. If you'd like to see some WIP images, head over to the Coker CoOp blog for an excellent read on this sculpt's progression from an idea to a fully fledged 3d character. Seeing the WIP images collected in one spot, it is astounding to see how much the character evolved. Enjoy!

Posted by Shof Coker at 8:31 PM No comments: 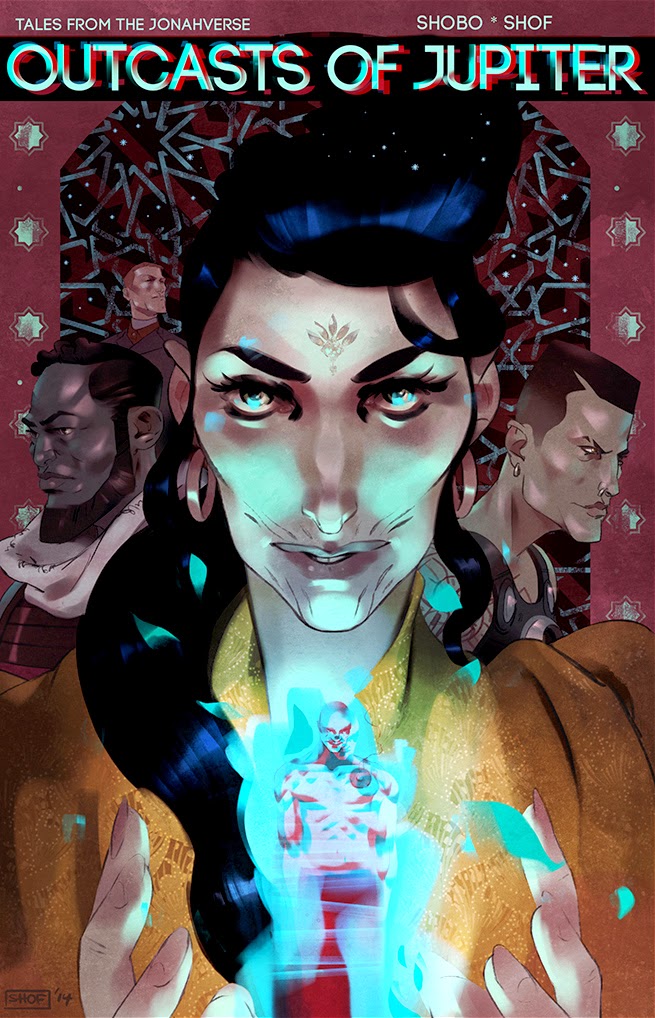 My brother and I have been fervently working on a comic project for the last several months and we've decided this week to officially announce plans for an exciting Kickstarter for it! The campaign will be going up within the week so please keep your eyes peeled. For now, here is the cover, a little taste of adventure. Do you believe in adventure?
Posted by Shof Coker at 2:03 AM No comments: 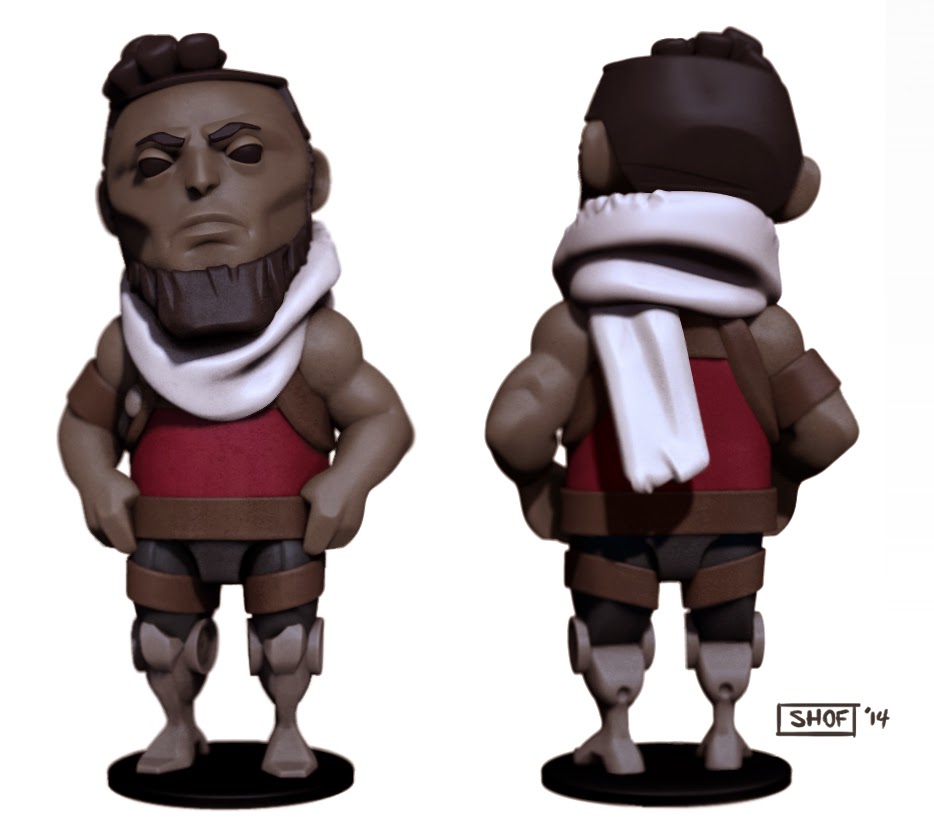 So the comic my brother and I are working on is coming along nicely. It now has a name- Outcasts of Jupiter. You can read about the process it took to develop the name here. We are gearing up for a big announcement for the comic, so please check back soon. This cute little guy is a mini version of a larger sculpt for the project. Denarii is one of four of the Outcasts of Jupiter. If you want to see some WIP images of the sculpt, head over here. I also got an earlier version of him 3d printed (My first 3d print!) and it looked much better than expected. The print below came from Sculpteo. Exciting times! 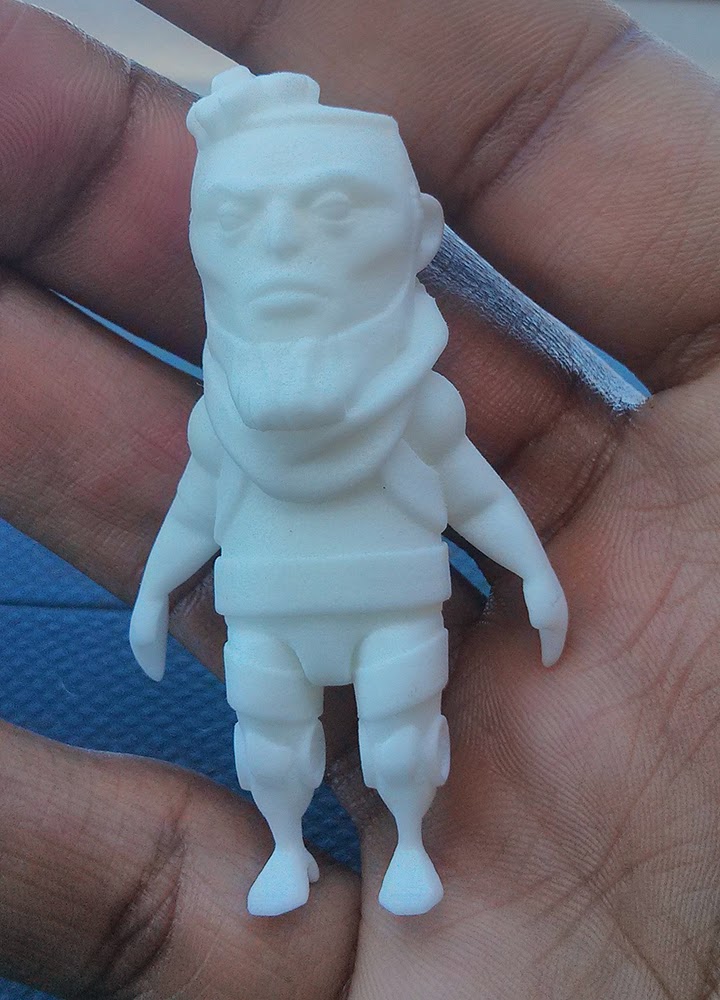 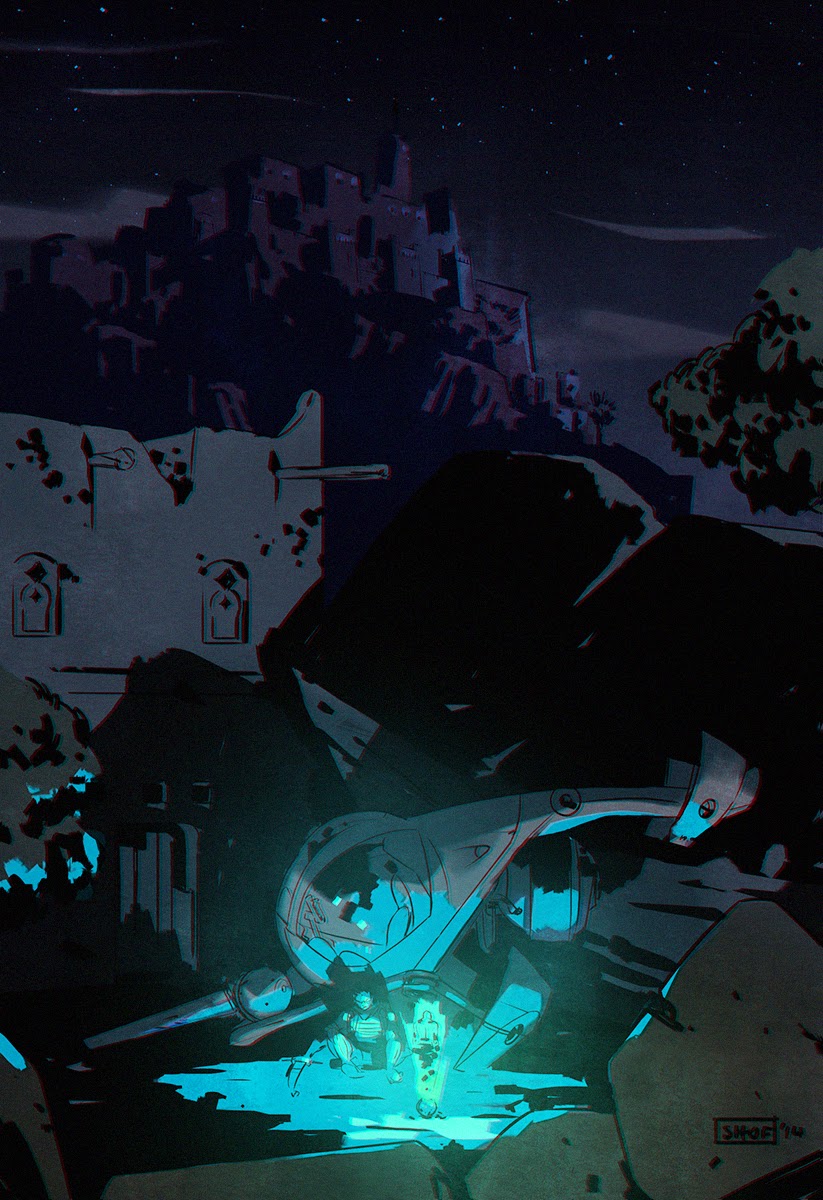 To Kickstarter
Posted by Shof Coker at 1:42 AM No comments:

It's been ages since I last posted a blog highlighting the work of another artist. I saw Jake Wyatt's short film, Metro first in 2012 and thought it was wonderful, but I recently stumbled across his tumblr and I'm just spellbound. Gaze upon the magnificence of his work. His work on the Necropolis web comic in particular just makes my heart ache. Brilliant draftsmanship, texture, ethereal color, and unusual storytelling. I've found a kindred spirit. Cheers, Mr. Wyatt. 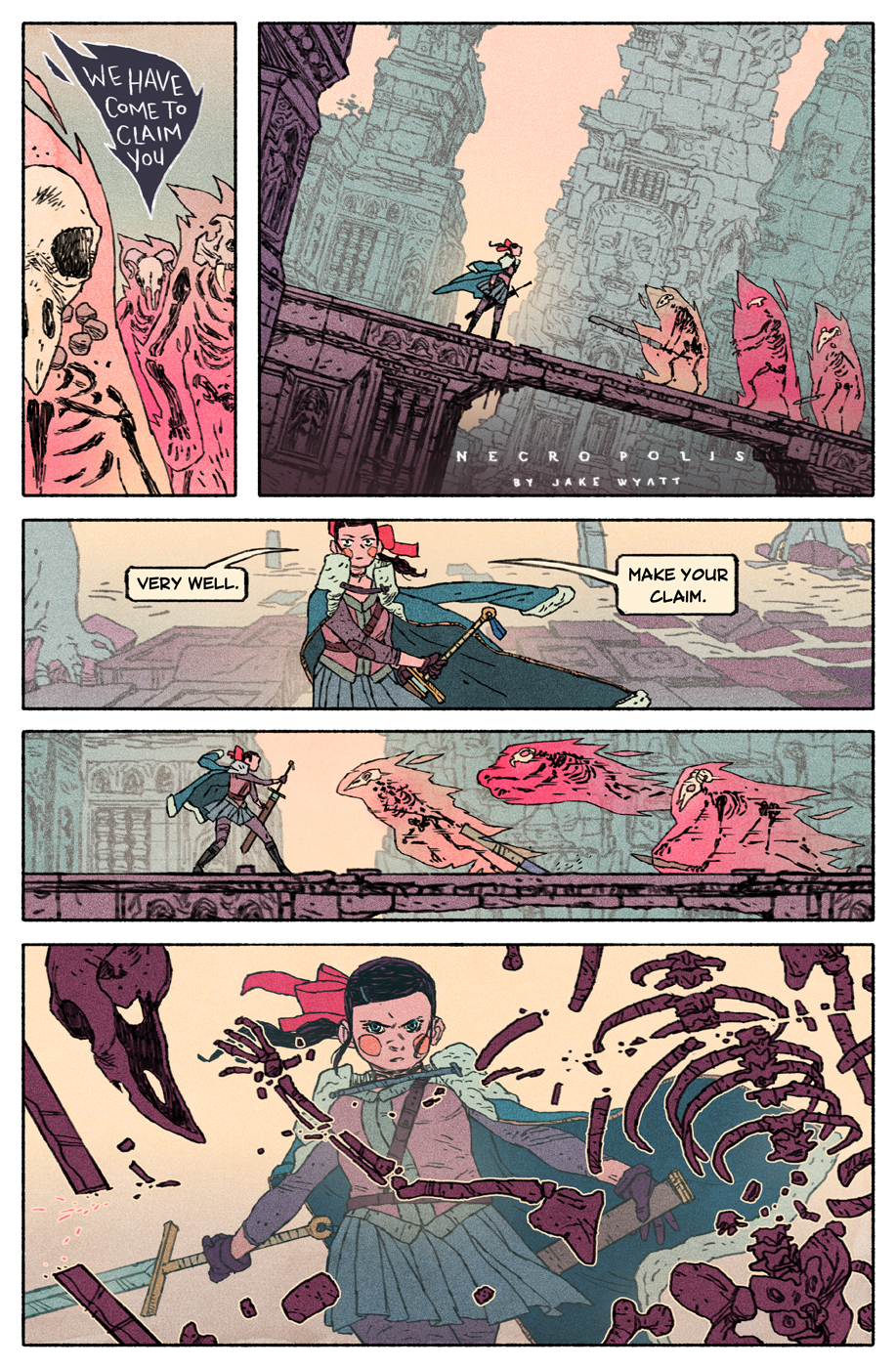 Panels from Necropolis by Jake Wyatt