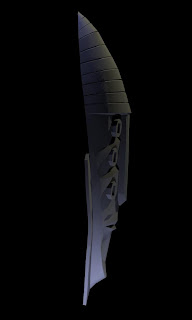 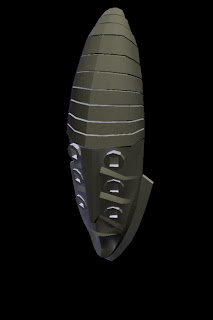 As the summer is drawing to a close, I would like to take some time to explain a few things that are going on with my projects. Well, I only have a week left at my internship in Salt lake city and that means a number of things. First of all, the 'Oro Iwin' posts are going to be on hold for a while, because they were mainly a summer project developed to channel research I had collected and to keep my drawing skills up to a decent level (as I was using Maya (3d software) all summer), plus they were really fun to draw.
Fortunately, this dire news has an upside; this means that upon returning to Memphis in a week, my attention will turn to the mammoth-scale animation I'm working on. The pictures above are a work in progress mask that will feature in said animation. Also I will be working on a painting or two that I plan to sell at the Holiday Bazaar this year (news and plans on that soon).

Anyway to close the chapter on Oro Iwin, several people have asked me what an Oro Iwin actually is. I defined the term earlier, but I guess because it was so long ago they didn't read the post. However, I am more than happy to reiterate. Well here goes; Oro Iwin are a race of beings/spirits that are neither demons, nor Orisha (deity), who are forced to dwell in certain forests in Yoruba land. Oro Iwin were once living beings eventually reincarnated by Olorun (the supreme deity) as spirits serving penance for a certain transgression in a life previously lived. Olorun must make this decision if a being's 'Ase' (life force) does not deserve after life in the ancestral plains or as a lesser Orisha. Oro Iwin all have unique stories,abilities and traits, as a result of this, demonstrated with the ones I threw light on. I hope you enjoyed them people, however do not fear for the next time you see them maybe in a 'Compendium' somewhere... hint hint.
Posted by Shof Coker at 10:23 AM 1 comment: 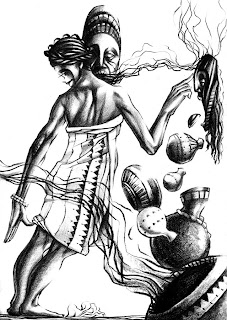 Here is an Oro Iwin called Iya Jijo Imo, which literally translates to 'Mysterious Lady.' Well, I knew I wanted lots of calabashes and I had a fairly good idea of her pose and the composition, but the masks came from stray lines that I thought were promising.
She is not based on any existing myth or legend, so the story or understanding of her character that I developed rather is built around the conventional nature of a mystery. The masks of course are an obvious symbol for this and the empty/ full calabashes (you never know) are linked to this key aspect of her character. As with all mysteries, she seeks to confound or trick unsuspecting people in order to better understand the nature of humanity, and many over the centuries have fallen prey to her fancies.
Posted by Shof Coker at 10:36 AM 6 comments: